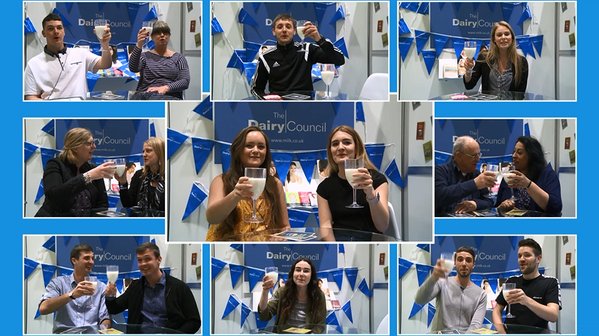 NO QUESTION, MILK IS STILL TOPS

Great Britain will propose a toast to milk today to celebrate its nutritious and delicious qualities on World Milk Day.

With milk appearing in 98% of fridges across the country, Great Britain is one of the leading nations in the world when it comes to milk consumption.

To celebrate milk’s long-standing role in global diets and nutrition, The Dairy Council reacquainted the public with some of the facts about the milk we’ve been drinking for 11,000 years.

Members of the public starred in a milk quiz, where the nutrient richness of milk emerged, along with facts such as one would have to eat 63 Brussel sprouts to get the same amount of calcium as a glass of milk.

Dr Anne Mullen, Director of Nutrition at The Dairy Council, said: “People across the world, from all backgrounds and all countries, consume milk every day and therefore we decided that World Milk Day was the perfect time to have a bit of fun and ask consumers how much they really know about the milk in their fridge.

“What became clear is that, whilst many of us recognise that milk is a healthy and nutritious, there are actually so many nutrients and minerals contained in one portion of milk that it is almost impossible to remember them all!

“We are delighted that the public is so supportive of dairy. Milk is one of the most nutritious, and delicious, foods in the British diet and it plays a crucial role in leading a healthy diet at all stages of life.

“With more than 30 countries taking part in World Milk Day – and that number growing steadily each year – Wednesday sees the ideal day for milk to steal the spotlight.”

Since 2001, when the first World Milk Day was proposed by FAO (the Food and Agriculture Organisation of the United Nations), June 1st has become the day which all aspects of milk are celebrated worldwide.